How to Take a Screenshot on Galaxy Fold 4? - Get The easy way to take a screenshot on the Samsung Galaxy Z Fold4 with screen recorder and camera tutorial tips and tricks explore the Samsung Fold 4 features here. 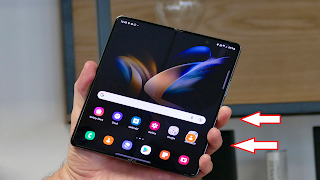 This device has Pro-grade Camera that stands on its own with the upgraded Rear Camera, Space Zoom and Nightography. The Samsung Fold4 bringing a pro-level kit to the foldable form for the first time a full kit of pro lenses and pro-grade video modes and settings from Apps, jut tap Camera.

How to Take a Screenshot on Galaxy Fold 4

To take a screenshot on Samsung Fold 4 User Manual instruction :

A. Just press and release the Side and Volume down keys.

The capture image of your screen. will automatically create a Screenshots album in the Gallery app.

This capture image screen by swiping the edge of your hand across it, from side to side, keeping in contact with the screen.

2. Tap to enable this feature. 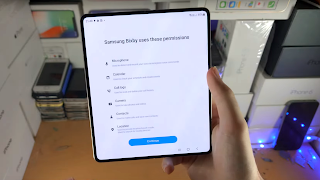 1. Press Bixby Button or side key

It so easy with Bixy to give a command with owners voice control.

You free to modify screenshot settings on this device by open Settings menu, tap Advanced features > Screenshots and screen recorder.

The additional toolbar options after you take a screenshot are:

Delete after sharing from toolbar

It will be automatically delete screenshots after they are shared through the screenshot toolbar.

The status bar or navigation bars will not display on screenshots.

You can choose screenshots file format to be saved as JPG or PNG files. 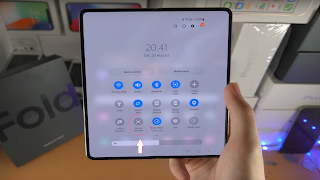 This is Fold 4 features Video Screen Recorder that will record activities on your device, write notes, and use the camera to record a video overlay of yourself to save and share with friends or family.

You can tap Skip countdown to begin recording immediately or choose:

>Tap Draw to draw on the screen.

>Tap Pointer to show an icon on the screen when using your S Pen (Galaxy Z Fold4 only).

> Tap Selfie video to include a recording from your front camera.

4. Tap Stop to finish recording. These are automatically saved to the Screen recordings album in the Gallery.

Time to set up Galaxy Z Fold4 and control the sound and quality settings for the screen recorder.
Manually go to Settings, tap Advanced features > Screenshots and screen recorder.

Set up the option below:

Sound: Choose what sounds to record while using the screen recorder.
Video quality: Select a resolution. Selecting a higher resolution for higher quality requires more memory.
Selfie video size: Drag the slider to set the size of the video overlay.
Show taps and touches: Enable to indicate screen taps and touches in a recording. 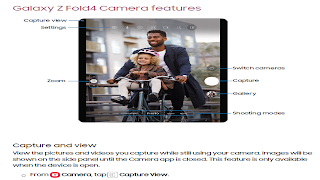 You are free to open full kit pro camera lenses and pro-grade video modes and settings on your new Samsung device,

A Simple way just open the Apps and tap Camera.

The Galaxy Fold 4 Camera ready to use.

Just press the Side button twice to open the Camera app.

Now it's time to view your images and videos has captured it can be done while still using your camera open. The photos will be shown on the side panel until the Camera app is closed. This feature is only available when the device is open. At the Camera menu tap Capture View to see the photos an videos.

You can move to a Fold4 from another OS doesn’t have to be hard just use Smart Switch App it can transfer data from many different devices, making the upgrade to Galaxy a seamless process for everyone so smart with Fold 4 intelligent features.